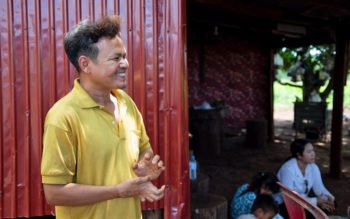 The alcoholic was Heng Siet, who spent his family’s whole money on alcohol.

One night, he was throwing plates across the room and breaking things around his house in a drunken rage, he saw his mother crying in the corner and realized he needed help.

Siet said that he felt his life was meaningless.

“I’m going to give it a try and begin to pray to God,” he agreed.

He reached his friend, who gave him a Bible and contact information for a relatively close man who lives nearby.

The proximity was relative, Siet ran hours in search of an unprecedented man in a city that he’d never been to before.

After finding him and being treated to a hearty meal, Siet was invited to church five days later.

He made his way back to the church by 15 kilometers on a bike. He gave his life to Jesus, soon afterward.

The pastor started to visit Siet’s home to disciple him. The pastor taught him how to lead a meeting of the church.

This was his plan, but he says he wasn’t obeying God. He didn’t want to give himself fully to Christ. He listened to his wife’s financial worries and the financial implications of starting churches.

She convinced him to accept a manual labour job that loading cassava which is a Southeast Asian vegetable into trucks.

They have seven children, so it was a regular concern about the food.

His Job was made an inspiration for him.

One a tragic day,

Siet was electrocuted in an accident at work. Over the following two years, he had skin grafts, lost the use of muscles, and endured shoulder problems.

He fought open wounds and gives severe pain, which he wouldn’t heal. He says it feels like it was on fire in every part of his body.

The healing process was difficult and lonely.

His wife had a phone number of his friend who initially told him about Christ. “Could you please come and pray for my husband, he needs encouragement.”

The friend came to pray for him and the relationship was became strengthened.

Siet says God told him about “Don’t go out and get your jobs or use your power to spend money but follow God’s way of ministry.”

He is amazed at Jesus’s protection. He shouldn’t have survived, but he says God’s love preserved his life.

He is in awe that, even though he hadn’t surrendered his heart fully over to the Lord, the Lord treats him as a treasured child.

“If you’re not putting God first, then it’s tough,” said siet. “Love the Lord with all of your heart.”

This love has led him to serve wholeheartedly. There are now ten people coming to his house to study the Bible. Everyone dedicated their lives to Christ and became baptized.

IMB staff regularly visits him to support and teach him and Christians in his church.