Jesus Helped Me: Phyu Lin has worked at tours and travel agency and leads a busy – productive life in Yangon, Myanmar’s capital. 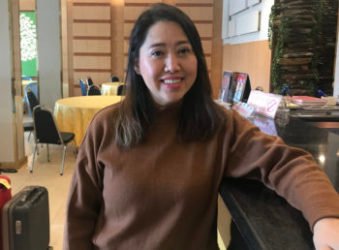 She had financial difficulties several years ago and racked up a large amount of debt. She owed $20,000 to a woman.

The woman was a Christian and she sent a Bible to Phyu Lin, but she also started a lawsuit in order to recover the money she owed. She was distressed by the lawsuit and her money woes, she went to Malaysia.

“In three years I was so confused, suffered from depression. Every day I cried and thinking about killing myself.”   Lin recalls.

One morning she picked up the Bible (that woman gave her) to get rid of desperation, she started reading it. At first, she was angry with God, because he killed people in the Old Testament.

But as she went on to learn she began to admire the fullness of the character of God, the perfect balance of His holiness with His goodness, mercy, and loving-kindness.

And that verse touched her heart: “Come to me, everyone who labors and are heavily laden, I’ll give you rest. Take my yoke upon you, and learn from me, for I am gentle and lowly in heart, and you will find rest for your souls. For my yoke is easy, and my burden is light.” (Matthew 11:28-30)

After reading that verse, she gave herself to Jesus as her Lord and Savior and felt God’s peace.

Shot in the arm, Jesus told the sheriff’s investigator to bless the suspect

Lin attended school in Malaysia and slowly put her life together. She studied business courses and also completed her Bible School.

She decided to return to Myanmar as she grew in her faith, she prayed that God would help her sell her car and other belongings to get enough money to come back to her country.

“People began to come and say “I want to buy your car. I didn’t advertise. I don’t know how they knew, only God knows. I felt jesus helped me”

God gave me a miracle so I went back to my country.

Phyu Lin came back to Myanmar with $3,000 that she raised from her sales. She began to pray every day for a good path in her life, one morning she felt God tell her to go to that woman she owed $20,000. She went straight away to a woman’s house without even brushing her teeth.

I went to that woman’s house that sued me and I pressed the bell. She thought “Why am I standing in front of this house? Is there something wrong with me?”

When the woman opened the door and saw Lin she was so shocked and started to cry.

The woman then did an unforeseen thing. She fell to her knees, reached out to hold Lin’s hand and continued to say “Thank you, God”

That lady prayed to God and telling Him she was not concerned with the money or lawsuit anymore, she just wanted Lin back. “I wanted you back God heard me! I wanted you back!” The woman exclaimed.

Next day woman shut down the bankruptcy case. “She ended it and now we are best friends,” Lin says. When I go preaching everywhere she follows me.

I thank God for that situation, God changed her heart.