At a weekend in Cambodia, Franklin Graham arranged a two-day event that took place in a 98 percent Buddhist region, where no less than 23000 people listened to the Gospel and 1,396 made the decision to give their life to Christ. 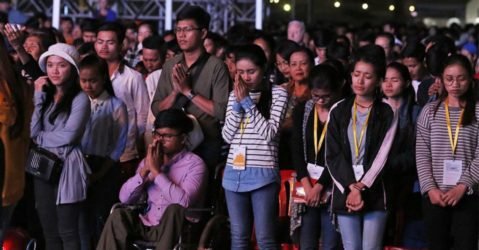 “Did you know that you have a soul?” Graham asked the crowd. “One day you will die, but your soul continues to live. Your soul will live in the presence of God, or it will be separated from God. The decision you make tonight will decide where your soul will spend eternity.”

The “Love Phnom Penh Festival with Franklin Graham” took place in the same country between 7 and 8 December. Where Christianity almost was eliminated during the Khmer Rouge. Genocide in the 1970s aimed towards the abolition of religion and develop a “master races” under the leadership of Pol Pot.

It was the focus of the film The Killing Fields. According to a press release, an estimated 2 million people died and only about 200 Christians survived. During the genocide missionaries fled.

Local Christian leaders reported that the festival had a major impact. According to Christian Newswire, it was the country’s largest Christian outreach, with 23,700 participants.

“Our city and the whole land is touched by the Holy Spirit. We are grateful for hearing the message that Jesus is the truth, Way and Life” said sin somnang,

pastor of Fellowship Church of Pochentong and the Festival’s general chairman.

“This will be a blessing for our country and our spiritual legacy to be remembered for the next generation through the Festival.”

Among those who made a stand for God who is Chhimreth was 59 years old. She previously heard about Christ but didn’t make Him the Lord of her life.

“I feel very happy and joyful,” Chhimreth said through a translator.

Those who make decisions will be guided by the local Churches.

Graham said, “We pray this [Festival] will open the door for more of the Lord’s work in the future”