A Muslim couple Oosman and his wife lived an ordinary life in an Arab kingdom of the Middle. After ten years of marriage, they were still childless. Finally, they agreed to take baby Ajmi from the local orphanage.

As the child was growing up, baby talk failed to appear and parents were worried and would finally learn that their beloved daughter would never learn to speak.

But she can hear clearly, doctors told her parents that she can’t speak (mute).

They were devastated but loved their baby completely. They knew it was impossible to return to the orphanage.

As soon as she grows old enough, they took her to the special school for the deaf and mute children.

When the Ajmi turned 10, a new teacher arrived at the school.

Unbeknownst to school authorities, the committed educationist and former Muslim, ‘just happened’ a volunteer evangelist with the Bibles for Mideast and began daily prayer classes.

She tries to stay away from the other teachers and staff, they were all strong Muslims. She did her best to pass the gospel message to her students.

As often as she could fit them in, she would tell the stories of Jesus ‘ life, death, and rebirth and try to make clear that redemption and eternal life could happen only through and with Christ.

Her teacher was fascinated by Ajmi. She loved Jesus’ photo that her teacher gave her. When she revealed that photo to her family, they scolded her for bringing such an item.

They took it away from her and cut it to pieces, pained their young daughter deeply.

She managed to save every piece of paper when her parents left the room, tape them back and hide the photo, where they wouldn’t find it.

She also, in secret, began praying to this prophet man Jesus not in words as we know them, but with the language of her heart and body.

The teacher gave her a booklet with the Gospel of Luke now that she had learned how to write, and told her young student to read it regularly. 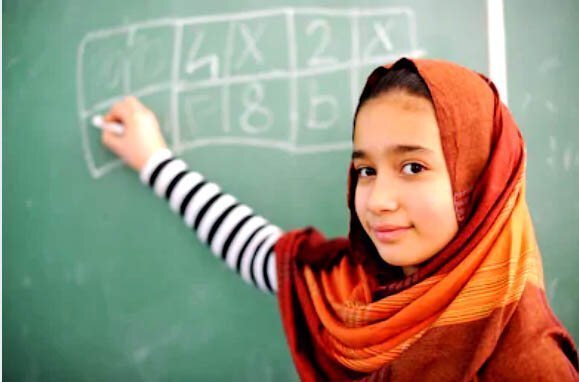 If Ajmi had problems reading, she would approach the teacher, give her questions and get an answer. Not long ago she embraced Christ as her own personal Lord and Savior.

Her beloved teacher provided her with a Bible in Arabic when she became a teenager. She had a beautiful book at last!

Ajmi was trying to distance herself from them while her parents did their daily namaz (Islamist ritual prayers). Instead, she was praying to God she now understood.

While their original attempts to spread the gospel only frustrated them, they could not deny their increasing joy and became more tolerant.

One day, in an accident, his dad injured himself badly. Doctors tried to help him, but the wound deteriorated, was infected seriously and failed to recover.

He turned to Islamic priests and imams when medicine couldn’t heal him, but his wound was still hardened.

Ajmi brought the gospel booklet to her father that her teacher had given her and motioned to him to read it.

“Jesus is going to cure you!” With gestures, she told him, but he would have none of it.

“I will ask the Lord Jesus for your salvation,“ she said, “Will you believe in Him if you are healed?” She had made him know the body language that they learned to understand.

Her mom piped in, “I can believe,” but her dad remained silent. She kept pressing him tearfully for a reply.

“Okay,” he finally relented. “If he heals me, I will believe in Jesus as my Lord and Savior.”

Ajmi closed her eyes and placed her hands on the wound of Oosman and prayed. Her parents saw and smiling at their humble young how she is praying, and not believing anything would change.

When she was done with praying,

Ajmi took away her hands, the wound was completely dried up! Her parents looked unbelieving. Each runs through their hands where the wound was … smooth, clear skin now.

Their doubts in Jesus as a healer, Lord and Savior vanished as completely as the oozing wound had, and everyone embraced Him into their hearts and live gladly.

The three knelt in front of the Lord and thanked and praised Him. Ajmi then began praising her parents in the language they knew overflowing with the Holy Spirit!

16 years ago she was quiet and now she was bursting both earthly and heavenly language. Several people even came to believe in Christ when their families and friends learned of her latest voice.

The family approached the local Bibles to the Middle East Pastor with the assistance of Ajmi’s teacher and not long after that, everybody was baptized and became a member.

Ajmi has now studied in high school and shares Jesus’ truth with her friends.

As they grow up in the Lord, pray for her and her parents. As more and more other people come to the faith with their witnesses, they are being abused steadily by the Muslim community. so please be in prayer for their protection as well.